This event has already taken place! Please make sure you are in the correct year. ×
Jan
18
Saturday
Jan
18
Sat 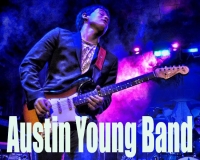 Blues
• Doors @ 7:00 PM/ Show @ 8:00 PM
• General Admission: $10 plus ticketing fee
Delivering fiery guitar licks and soulful sounds to listeners worldwide, Austin Young has crafted a unique sound and crowd-pleasing experience. With electrifying passion, energy, and stage presence, Austin makes every show personable and memorable to those within earshot. While staying true to traditional Blues elements, Austin has incorporated themes of contemporary Rock, Jazz, and Gospel to make his sound stand out to the large crowds he attracts. Inspired to pick up a guitar by many musicians, including his late father Tim Young, Austin has already produced and released two studio albums full of his original music, Blue as Can Be (2013) and Not So Simple (2016), and has been recognized for several awards in his home state of Colorado such as Best Guitar Player (2012-2015) from the Colorado Blues Society Listeners Choice Awards.
Get Tickets
Advertisement
Links: http://www.stargazersth.....tre.com/upcoming-events