This event has already taken place! Please make sure you are in the correct year. ×
Jul
19
Friday
Jul
19
Fri 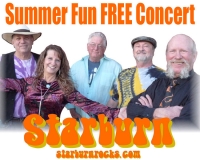 Join Starburn on a journey through the best decade of rock music ever, the 60's and 70's. Generations of music lovers will be singing along to favorites by Santana, The Doors, Jefferson Airplane, Janis Joplin, The Doobie Brothers, Pink Floyd & more!