This event has already taken place! Please make sure you are in the correct year. ×
Jul
20
Saturday
Jul
20
Sat 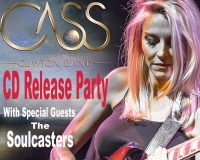 Cass Clayton Band has become known across the region for its tight chemistry and high-energy stage presence, a reputation that has landed them on some of the best stages, shows, festivals and radio shows in Colorado and beyond. Their unique blend of rock, R&B, funk, blues and soul has a distinctly contemporary feel, and has won over audiences across age groups and genres. Cass’s new album (released June, 2018) has won 4 songwriting awards and garnered top reviews from magazines nationally and internationally. They were also recently voted Album of the Year 2018 in the Colorado Blues Society Members’ Choice Awards. In addition, Cass has been voted as one of the top 3 slide guitar players in Colorado and top 2 vocalists (CO Blues Society Members’ Choice Awards). In February, 2019, she was featured on the cover of RECORDING Magazine with a 4-page feature article. Known for a uniquely soulful and velvety vocal style, Cass effortlessly moves from gentle and contemplative to a belting range that will knock you flat.

Special guests, The Soulcasters will open the show!
Get Tickets
Advertisement
Links: http://www.stargazersth.....3f514e034dd0b4528f75e8e