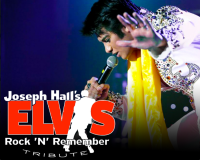 On Sunday, May 31st, Hall will perform in the late morning with two ticket options available: General and General Brunch. For an additional $10, you can enjoy a brunch buffet catered by Stargazers before/during the show! Drink specials including Mimosas will also be available to purchase on Sunday. (Brunch ticket option only available on Sunday).

Joseph Hall, born in 1984 has been paying tribute to the legacy of Elvis Presley since 2006. He starred on NBC’s America’s Got Talent in 2008, making 6 TV appearances, viewed by more than 90 million people and placing as one of the top 10 finalists! Sharon Osbourne was impressed enough to tell him, ” I’ve got shoes older than you, but I’d like to try you on!” Joseph Hall has performed all over the world, from Las Vegas, Nevada to Porthcawl, Wales. Joseph Hall has won many awards throughout his young career including the “Spirit of Elvis ” award. Joseph has worked with Elvis Presley Enterprises, Legends in Concert, and has officially been recognized as one of the top Elvis tribute artists in the world today. Hall completed 6 smashed seasons in Branson, Missouri.

“My goal is to capture the essence of Elvis Presley, to pay tribute to him with the utmost respect to his legacy, his music, his image and above all else his fans.” -Joseph Hall